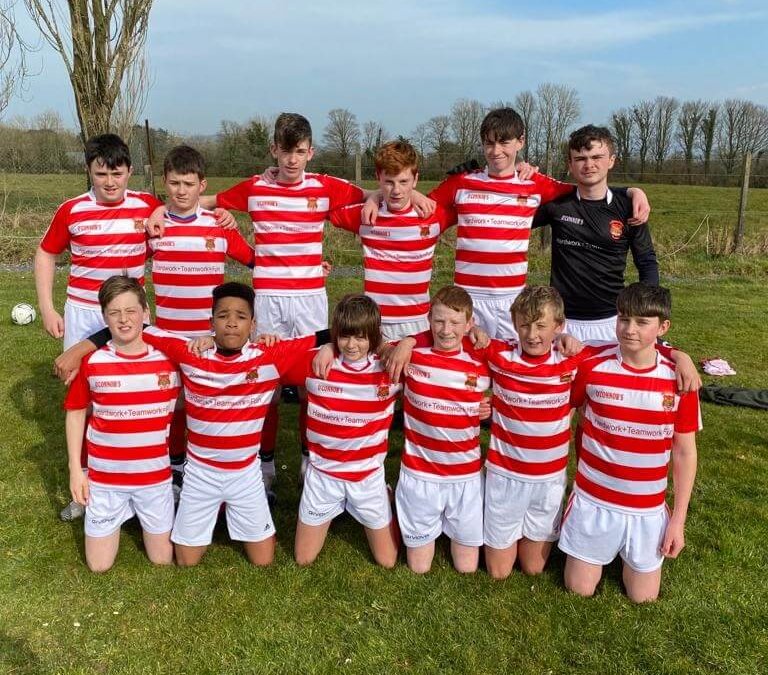 Galbaly 1 Charleville AFC 5
Charleville travelled to Galbally on Saturday, with the following squad, Alex Kennedy, Daire McKenna, Tiernan Walsh, Evan O’Riordan, Eoin Horan, Cian Finucane, Jamie O’Toole, Daniel Mackissey, Ben Ross, Nathaniel Mthembu, Dara O’Sullivan & Brian Nagy.
The game was a very sporting game, played in difficult conditions at times and we’d like to pay special thanks to Brian Nagy who joined us from the u13 boys squad and capped his appearance with a superb goal.Charleville started the game well and dominated possession, this resulted in a number of corners of which Charleville converted 2 to take a 2 goal lead, the first converted by Nathaniel Mthembu at the back post from a Cian Finucane strike, the second a superb header from Ben Ross again supplied by Cian Finucane.

Charleville made it 3 nil soon after, with the highlight of the game, following great play in midfield, Jamie O’Toole switched the play to find Brian Nagy on the right wing, who calmly finished to the back of the net. Nathaniel Mthembu made it 4 nil just before half time following some lovely individual skill.

Galbally were very resilient in the play and kept their shape and discipline throughout the second half and deservedly scored in the second half following a break away and a converted penalty, Alex Kennedy having had a quiet afternoon in goals, couldn’t really do much to stop a well taken spot kick.

Charleville made it 5 soon after, with Dara O’Sullivan scoring a well deserved goal to cap his performance following a lovely assist from Nathaniel. Charleville were again solid at the back, with Daire McKenna, Tiernan Walsh & Evan O’Riordan putting in disciplined self-assured performances, Eoin Horan & Daniel mackissey were equally industrious on the left and right of midfield all throughout the game.

Well done to the boys and their parents for turning up in great numbers in difficult conditions on a bank holiday weekend and putting in another great performance.